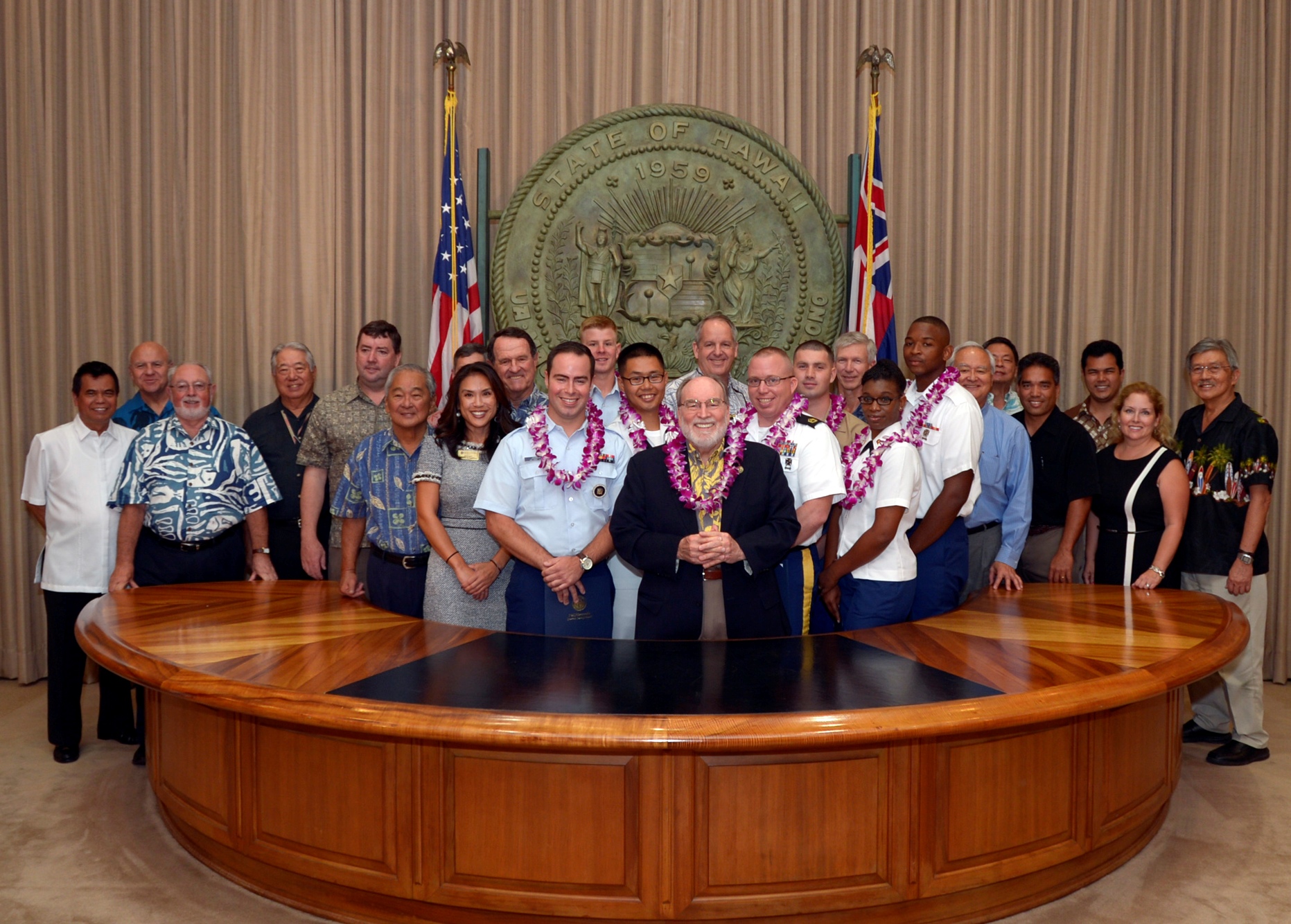 HONOLULU (May 2, 2014) – The Military Affairs Council (MAC) of the Chamber of Commerce Hawaii today joined Governor Neil Abercrombie in a proclamation ceremony designating May 2014 as the 29th Annual Hawaii Military Appreciation Month and to honor service men and women from the U.S. Pacific Command and the component commands for the U.S. Navy, Army, Air Force, Marine Corps, Coast Guard and Hawaii National Guard for their community service contributions.

In his proclamation, Governor Abercrombie honored the military’s untold sacrifices and contributions to Hawaii, and provided seven service members with a commendation certificate for their outstanding contributions. Major General Anthony G. Crutchfield, Chief of Staff, U.S. Pacific Command, accepted the proclamation from Governor Abercrombie on behalf of all of the component commands.

“I laud the commitment of our troops and the contributions they make with their families every day,” Governor Neil Abercrombie said. “We recognize that while individuals are recruited, entire families are retained. The people of Hawaii value our military as members of our island community and look forward to their continuing presence with Aloha.”

The ceremony was an opportunity for government, business and other community leaders to express deep appreciation for the many contributions made daily by service members and their families. Approximately 30 members of the MAC were present, including MAC Chair David Carey, as well as elected officials, including State Senate President Donna Mercado Kim, Senator Will Espero (Chair of Senate Committee on Public Safety, Intergovernmental and Military Affairs) and State Representative K. Mark Takai (Chair of House Committee on Veterans, Military & International Affairs, and Culture and the Arts). The proclamation ceremony took place in the Executive Chambers at the Hawaii State Capitol and was followed by a reception, during which invited leaders had an opportunity to thank and pay tribute to the honorees.

The MAC, comprised of business leaders, retired military flag and general officers, and strategic consultants versed in military affairs, was established by the Chamber in 1985 to promote, preserve and protect the military’s presence in Hawaii, and serve as the advocate for military and their families.

“The individual sacrifices of our service men and women, and their families, often go overlooked,” said Charlie Ota, the Chamber’s Vice President of Military Affairs. “The Chamber is honored to join Governor Abercrombie to pay homage to our soldiers and recognize all of their efforts in positively impacting Hawaii’s communities.”

As part of “Hawaii Military Appreciation Month,” businesses throughout the state will be offering special discounts and offers to our military service men and women during the month of May. For more information, visit http://www.himilitary.com/.

As the leading “Voice of Business” in Hawaii, the Chamber of Commerce Hawaii is the state’s largest organization advocating for businesses in Hawaii. Established in 1850, the Chamber works on behalf of its approximately 1,000 member companies and the business community, as a whole, to advance the state’s economic climate and help businesses succeed. The Chamber supports its members with training, business building and networking opportunities; coordinates advocacy activities for members’ involvement; and serves as a liaison between civilian and military communities in Hawaii.