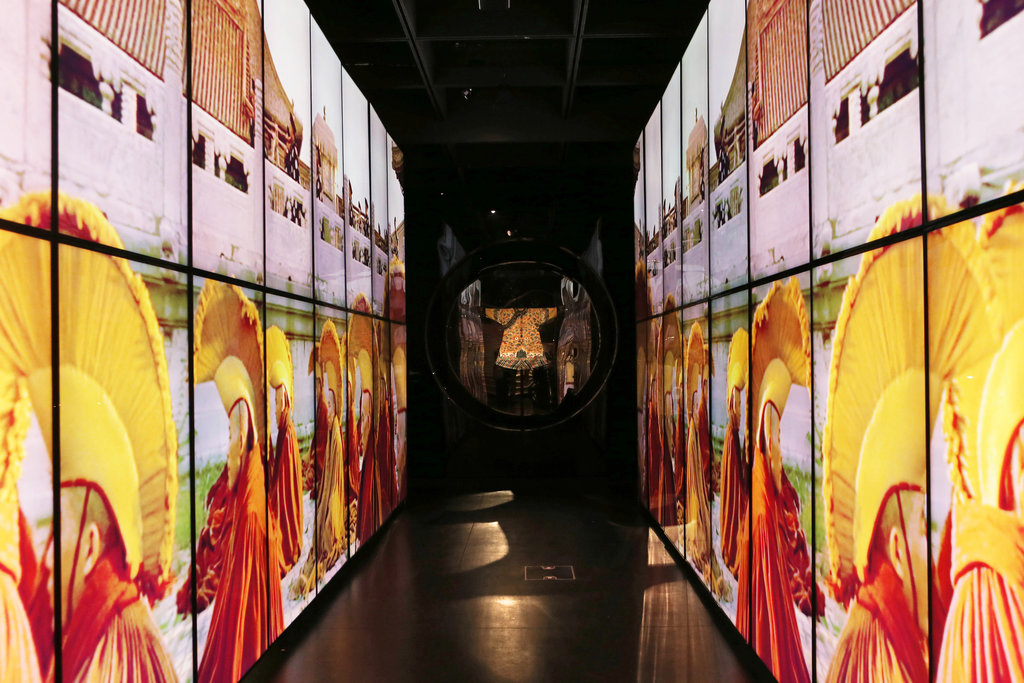 The Costume Institute is housed within the Metropolitan Museum of Art but exists in a separate universe, one with its own galleries, budget, press representative and aesthetic protocols. To some this fashion-world apart is a Martian oddity, to others it is a vital preserve of Venusian luxe. Either way — and for better and worse — it has never been as fully integrated with the Met as it is in the exhibition that opened this week called “China: Through the Looking Glass.”

Designed to illustrate the influence of Chinese culture on Western fashion, the show is spread over three floors. It fills both the basement-level Anna Wintour Costume Center and the Chinese galleries on the second floor, and claims a repurposed Egyptian space in between. In terms of real estate, the show is one of the museum’s largest ever. And it feels large, exhaustingly so, with acres of objects, photographs, film clips and apparel punched up by sound-and-light special effects.

In a way, it’s all just fashion business as usual, the product of a culture that speaks a language of overkill. In this case, though, a smaller, better show is all but buried: a nuanced historical essay on cultural hybridity, the mixing of styles and ideas over space and time that leaves every culture equal in its impurity to every other culture.

It’s a particularly apt theme for this show, which celebrates the centenary of the Met’s Asian department and an art collection that has done so much to shape how something called Asia has been defined and received in something called the West.

Reception itself goes back centuries, and reaction was always complicated. When Chinese silks arrived in ancient Rome, they caused a double-edged sensation. They were taken as a sensuous wonder, evidence of a distant culture marvelous beyond imagining. But they were also viewed as a form of imported decadence, carrying a virus of effeminacy that would weaken Rome’s imperial muscle.

Conflicted Western attitudes toward an exotic East became the rule, as did a dynamic of back-and-forth influence. During the 18th-century Enlightenment, when Europe was in a mood to embrace the unknown, a vogue for chinoiserie swept the continent, creating a vast market for luxury goods — fabrics, ceramics, lacquerware — either brought from China or produced locally in a Chinese style: French gowns were sometimes made from imported silk printed with “Chinese” motifs that originated in Europe.

In the empire-minded 19th century, the European embrace became possessive. China was a resource to be exploited. When it resisted, its popular image altered. What was once a realm of fairy-tale grace became home to barbaric rulers, heathen masses and — after England imported opium from India into China — drug addicts. The United States shut the door to Chinese immigrants, who were treated with suspicion and contempt.

The show slides over most of this. The wall texts and catalog allude to troubling histories but advise us to avoid politically correct thinking. Fashion isn’t the place to get serious about such things. Yes, it creates and perpetuates stereotypes, on every side. But it’s all about harmless surface and shine. Relax and enjoy. Feast your eyes.

There’s a lot to feast on, with most of the fashion from the 20th century and much of the art older. And there are several possible entry points to the table, beginning in the Costume Center, which breaks the chronology of modern China into eras: late empire, new Republic and Cultural Revolution.

The gallery labeled “Emperor to Citizen” is set in the sunset years of the Qing dynasty (1644-1911). Black mirrors line the space, making its dimensions feel unreadable and unstable. Clips from Bernardo Bertolucci’s 1987 film, “The Last Emperor,” which dramatized the brief reign of the child-emperor Pu Yi, play on a central screen. Encased on the back wall is one of the child’s robes, made from silk of imperial yellow embroidered with clouds, waves and dragons, and on loan from the Palace Museum in Beijing.

On either side, sumptuous adult-size garments, old and new, are arranged in a line like attentive courtiers: coats that belonged to the 18th-century Qianlong emperor; even more sumptuous costumes worn by actors employed in his court; and contemporary Western designs that have been inspired by them — an embroidery-scabbed yellow silk damask dress by John Galliano; a skintight evening gown with digitized dragons and an extravagant train by Tom Ford — but exceed them in ostentation. The messages: Politics is theater; high fashion is a fundamentally royalist art.

But the look of authority changes.

During the years of the Chinese Republic (1912-1949), a type of columnar, high-collar, slit dress called the cheongsam, or qipao, was the power outfit of choice for figures like Madame Chiang Kai-shek. It gained an international vogue through her good-will tours in the months leading up to World War II, and it would come back into favor, though with louche associations, in the 1960s, thanks to films like “The World of Suzie Wong.”

To Western designers, enforced consensus is an invitation to rebel. In that spirit, the New York-based designer Vivienne Tam plastered dresses with satirical portraits of Mao by the contemporary New York-based artist Zhang Hongtu, and Vivienne Westwood devised a People’s Liberation Army ensemble with short-shorts.

Pre-Internet, films were primary dictators of fashion, as demonstrated by dozens of clips chosen by the filmmaker Wong Kar-wai with William Chang that are scattered throughout the show. At least one style-hero emerges from them: the Chinese-American actress Anna May Wong (1905-1961), who was born in Los Angeles and molded by Hollywood into its token Asian star, as long as she was willing to play to type.

A homage to her in the Met’s Chinese galleries is really a tribute to a fantastic Travis Banton dress she once wore — black, with a gold dragon writhing down the front — and this skewed focus says a lot. Ms. Wong grew tired of entertaining Western audiences with racist clichés and dropped out of films. The Met show, organized by Andrew Bolton, a curator at the Costume Institute, gives a sense of what she was up against. In a word: Lookism, attention to surface as a measure of value and authenticity.

It’s the dominant ethic and aesthetic of the show. In one instance, fashion’s notion of incorporating Chinese influence into couture is to print dress fabric with calligraphic characters, either randomly chosen or faked. A 1951 Christian Dior cocktail dress is adorned with a real eighth-century stele inscription — a rubbing from the stone is in the show — but the inscription chosen, surely unwittingly, is an unromantic report on intestinal distress.

In other cases, influence is even more direct. How to get the look of blue-and-white porcelain into your fall/winter line? Smash up some plates and stitch the pieces into a bodice, which is what Alexander McQueen did. How to give a designer fragrance a sexy spin? Take a hint from Yves Saint Laurent and play the exotic Orient card: Call the scent Opium and advertise it with the image of an apparently zonked-out model.

The history of West-on-East exploitation embedded in this bit of marketing legerdemain is deep; we’re still living with damage done. How can fashion, and fashion shows, get around this? By getting beyond is one way. Chinese-inflected Galliano designs are installed in the Astor Court, and they’re so avidly inventive that “Chinese” has cooked off: They’re raiments of a whole new ethnicity.

Another possibility is to show respect for source cultures, which in this exhibition would have meant taking the art in the fashion-plus-art balance seriously. Mr. Bolton has an astute eye, and he makes some quietly telling comparative pairings. In one, he places an eighth-century Tang dynasty silver mirror beside a 1924 Jeanne Lanvin black silk robe that traces a similar shape in silver thread and pearls. In another, he sets a magnificent 2007 gold lamé evening gown by the Chinese couturier Guo Pei in the center of a gallery ringed with sculptures of Buddha.

The only formal link is the lobed cut of the gown’s bodice and hem, which echoes the lotus-blossom patterns on the Buddha’s throne. But if you think about it, there are possible connective ideas, too, in having this contemporary global image of splendor and emptiness appear within this particular sculptural circle. There are ideas here to talk about. Fashion, like art, can be something to think with.

And it can also be just a distraction, as it is in an adjoining high-ceilinged hall devoted to monumental Buddhist images. It includes a glorious 14th-century fresco of celestial beings dressed to the nines, a runway show in themselves. But the work placed in front of it, blocking the view, is a trashy tableau of 2015 fashion inspired by martial arts, with mannequins in kung-fu-wear in a bamboo grove of plastic tubing.

Old stereotypes unfold; art is reduced to being a prop in a fashion shoot. The exhibition’s goal of closing the gap between fashion and art at the Met is realized, but the difference between the two disciplines is, too often, made glaring.

Correction: May 7, 2015
An earlier version of this review misidentified the artist whose Mao portraits are used by Vivienne Tam. He is Zhang Hongtu, not Andy Warhol.
Original article can be found here