The Chamber of Commerce Hawaii is the second oldest Chamber west of the Rockies and is one of the oldest business organizations in the state.

When the California Gold Rush of 1848 created an overwhelming demand for food and supplies from Honolulu, Hawaii’s business boom began. People and goods quickly began to flow back and forth between the ports of Honolulu and San Francisco. It was at this time that a small group of merchants, who realized that to secure the advantages the islands had to offer for commerce, decided they would need to join together and establish common goals and policies for trade and commerce, along with addressing the concerns of the island community.

In 1850, ten of the city’s leading businessmen signed the constitution of a chamber of commerce. As it evolved, this organization came to play a major role in building Honolulu from a collection of mud streets and thatched houses to a bustling cosmopolitan center.

Today, the Chamber is an organization representing the interests of Hawaii’s business community. With more than 2,000 member companies representing over 200,000 employees, the Chamber serves as the “Voice of Business” in Hawaii. 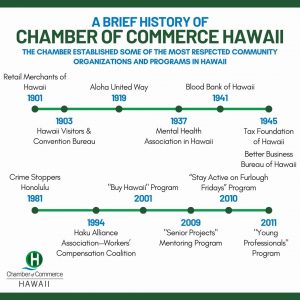