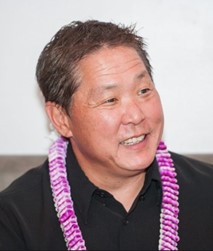 Kurt was born and raised in Kapaa, Kauai and attended Kapaa High School. His years growing up on Kauai were spent around his grandparents’ restaurants – Tony’s Charcoal Broiler and Tony’s Delicatessen, both located on Rice Street.

Kurt graduated from the University of Hawaii with a BFA in graphic design and later attended the Art Center College of Design in Pasadena, majoring in design, packaging, with a focus on environmental design.

Kurt established Osaki Design in 1995 specializing in corporate and sports branding. Currently, he has offices in the Bay Area and Honolulu and his clients include professional sports teams, sports leagues, universities and corporations throughout the United States and Japan.

One of his major accomplishments came in 2000 when he and his team designed the “H” logo for the University of Hawaii. His philosophy has always been simple. “Good design is a product of form, function and good service.”