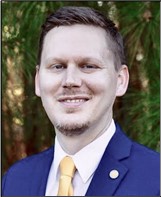 Lance R. Askildson, Ph.D. serves as Provost & Vice-President for Academic Affairs and a Professor of Linguistics at Chaminade University of Honolulu. Under Dr. Askildson’s leadership, Chaminade University has launched new baccalaureate, masters and doctoral degree programs while also reaffirming its institutional accreditation and implementing a redesign of its core curriculum.  As Provost, Dr. Askildson leads Chaminade’s deans, faculty and the academic enterprise as a whole in service to students and the educational mission of the university.

Prior to his role at Chaminade University, Dr. Askildson served as Assistant Provost and founding Director of the Center for the Study of Languages & Cultures at the University of Notre Dame where he served as an Associate Professor of Foreign Languages and was instrumental in the establishment of the Keough School of Global Affairs.  Dr. Askildson also served as Vice-Provost, Chief International Officer and an Associate Professor at Kennesaw State University in Atlanta where he played a leadership role in one of the nation’s largest university mergers, established the institution’s inaugural branch campus and implemented the quality enhancement plan for reaffirmation of accreditation.

Dr. Askildson is an internationally recognized scholar of second language acquisition, language learning technology and international studies. He has published extensively within these areas of research and has served as the managing editor of major academic journals and a contributing editor for many more. Dr. Askildson is the former Executive Secretary of the International Association for Language Learning Technology; the previous chair of the United Nations Institute for Training & Research regional training center in Atlanta; a trustee and board member of the Center for the Advanced Study of International Education; and an emeritus advisory board member of the federally funded Title VI National Foreign Language Resource Center on Language Assessment & Evaluation based at Georgetown University.

Dr. Askildson is a frequent invited speaker and consultant on the internationalization of higher education, language program assessment and leadership as well as an active member of local community organizations, philanthropic societies and chambers of commerce.  Originally from Minnesota, Dr. Askildson completed his Ph.D. in Applied Linguistics at the University of Arizona and his Masters Degree in Multilingual & Multicultural Education from Florida State University.  Dr. Askildson has also conducted extensive post-graduate work and research in France, Germany and Morocco and is professionally fluent in French.  He lives in Honolulu in a bilingual home with his son, Samuel, and wife, Dr. Virginie Askildson.