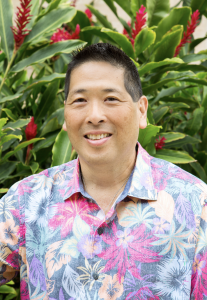 Mike is the general manager for two community shopping centers in Honolulu- the City Square in Kapalama and the Waimalu Plaza in Aiea.  He began his career in commercial management with office and medical buildings in Los Angeles which eventually provided the opportunity to move back to Honolulu to manage retail, office and industrial properties on Oahu and Kauai.  Mike took a hiatus from property management during a 17 year stretch with the Honolulu Police Department where he retired as a sergeant in the Narcotics Vice Division.  In 2010 he returned to commercial real estate with his father Glenn where he assumed the fiscal and facility management of the two shopping centers.

Mike is a member of the Chamber of Commerce Hawaii, International Council of Shopping Centers, US Japan Council and the 200 Club Honolulu.  Born in Honolulu, Mike received a BA from the University of Washington.