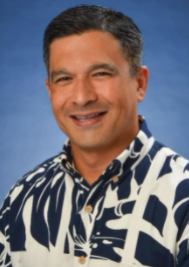 Robert K.W.H. Nobriga is the president of Island Holdings, Inc., where he oversees a family of Hawaii companies engaged primarily in private equity and real estate investment, insurance products and services, and technology consulting. The family of Island Holdings’ companies include Tradewind Capital Group, Island Insurance, Atlas Insurance, IC International, and Pacxa.  Prior to joining Island Holdings, Mr. Nobriga held several senior leadership roles in Hawaii over the past two decades primarily in the banking and healthcare sectors.

Mr. Nobriga has been an active member of the community. He has served as trustee for Kamehameha Schools since 2013, including serving terms as its chairperson, vice chairperson, and treasurer. From 2009 until his appointment as trustee, he was one of two financial experts appointed by the Probate Court as independent audit committee members whose purpose was to assist the Board of Trustees in fulfilling its fiduciary responsibilities.  Mr. Nobriga also served on The Queen’s Health Systems Board, including as the chairperson of its finance committee and as a member of its endowment and audit committees.  He also currently serves as a board member of Haleakala Ranch on Maui.