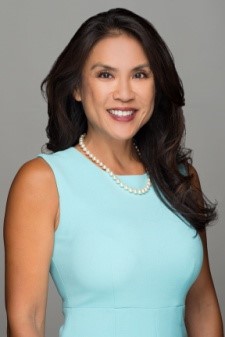 Sherry Menor-McNamara is the President and CEO of the Chamber of Commerce Hawaii; becoming the youngest and first female leader of the organization’s 167-year history.

She serves on boards of the Hawaii Tourism Authority, Queen’s Health Systems, JAIMS Foundation, FILCom Center, East-West Center Foundation, Advisory Council of the Center for Tomorrow’s Leaders, and Move Oahu Forward. Sherry also serves on national boards such as the Association of Chamber of Commerce Executives, Council of State Chambers, and the Committee of 100 for the US Chamber.

In 2015, Sherry was selected to represent the United States in the Korea Foundation’s Program for Distinguished Individuals and in 2014, participate in Japan’s Ministry of Foreign Affairs Program.

She is a 2017 honoree of the Hawaii Public Schools Foundation. Also, she was recognized as “Top 10 to Watch” by PBN and “20 for the next 20” by Hawaii Business magazine. She is a Laureate of the Junior Achievement of Hawaii Hall of Fame.

A fellow of the Omidyar Fellows Leadership Program, she earned a certificate in Expanding Impact in Advocacy from the Harvard Kennedy School of Executive Education. She holds a BA from UCLA and JD/MBA from the University of Hawaii.

Born in Tokyo, Japan and raised in Hilo, Sherry is married to John McNamara. She is a certified Yoga Sculpt instructor and enjoys golfing, traveling and spending time with her husband and dogs, Bruin and Kuma-chan.